Sigiriya or Sinhagiri is considered to be one of the most important historical monument in the world dominated by a massive column of rock nearly 200 metres high has great architectural significance. Not only is it a UNESCO World Heritage site but also unofficially referred by locals as the Eighth Wonder of the World attracting thousands of tourists every year. It is probably the most visited tourist destination of Sri Lanka and one of the finest examples of ancient urban planning. A must visit place for history and architectural lovers across the globe.

The palace is located in the heart of the island between the towns of Dambulla and Habarane on a massive rocky plateau 370 meters above the sea level formed from magma of an extinct volcano. The visitors can get an astonishing viewthat includes an unique harmony between the nature and human imagination.

The fortress complex includes remnants of a ruined palace, surrounded by an extensive network of fortifications, vast gardens, ponds, canals, alleys and fountains. The surrounding territories of Sigiriya were inhibited for several thousand years. One of the most striking features of Sigiriya is its Mirror wall. In the old days it was polished so thoroughly that the king could see his reflection in it. The Mirror wall is painted with inscriptions and poems written by the visitors of Sigiriya.

The gardens of Sigiriya are among the oldest landscaped gardens in the world and there you can find water gardens, cave and boulder gardens, and also terraced gardens which consists of a complex hydraulic system, which consists of canals, locks, lakes, dams, bridges, fountains, as well as surface and underground water pumps. In the rainy season, all channels are filled with water, which begins to circulate through the whole area of Sigiriya. Fountains of Sigiriya built in the V century, perhaps, are the oldest in the world.

You also have the boulder gardens consist of several large boulders linked by winding pathways. The gardens extend from the northern slopes to the southern slopes of the hills at the foot of Sigiris rock. Most of these boulders had a building or pavilion upon them; there are cuttings that were used as footings for brick walls and beamsas well as terraced gardens are formed from the natural hill at the base of the Sigiriya rock. A series of terraces rises from the pathways of the boulder garden to the staircases on the rock. These have been created by the construction of brick walls, and are located in a roughly concentric plan around the rock.

It takes around 4 and half hours to reach Sirigiya from Colombo. Colombo is the perfect base for foreign tourists coming from abroad to make onwards journey from Colombo to Sigiriya. Easisest way to reach is to hire a taxi or a car. Public buses are also available along this route. The closest railway station to Sigiriya is at Habarana, which is approximately 15km away. 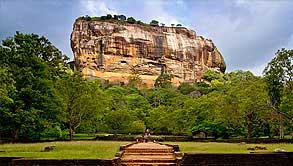