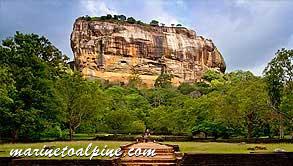 Day 1 Arrival at  Bandaranaike International Airport  (CMB) / Ratmalana Airport (RML) / Mattala Rajapaksa International Airport  (HRI) / Port of Kolomtota - Transfer to Siigiriya - Its approximately 180 kilometers and is 04 1/2 hours to 05 hours drive by road - On the way visit Pinnawala Elephant Orphanage. Which is home for about 90 elephants, out of which some are baby elephants found abandoned or orphaned in the wild - The best time to visit is during the feeding time at 9.15 a.m or 1.15 p.m. Sigiriya - An ancient rock fortress from the 5th Century, amazing views of the cultural triangle - Also one can visit the Sigiriya Museum - SIGIRIYA is located in the central Matale District of the Central Province, Sri Lanka in an area dominated by a massive column of rock nearly 200 meters high - According to the ancient Sri Lankan chronicle the Culavamsa the site was selected by King Kasyapa (477 – 495 AD) for his new capital - He built his palace on the top of this rock and decorated its sides with colorful frescoes - Overnight stay at Hotel in Sigiriya

Day 2 Sigiriya / Anuradhapura / Polonnaruwa / Sigiriya - Breakfast at the hotel and visit Anuradhapuraya and Polonnaruwa Anuradhapura is a major city in Sri Lanka - It is the capital city of North Central Province, Sri Lanka and the capital of Anuradhapura District - Anuradhapura is one of the ancient capitals of Sri Lanka, famous for its well-preserved ruins of Sri Lankan civilization - It was 3rd capital of the Kingdom of Rajarata after Tambapanni and Upatissa Nuwara - The city, now a UNESCO World Heritage Site, was the center of Theravada Buddhism - The city lies 205 kilometers north of the current capital Colombo on the banks of the historic Malvathu Oya - It is the oldest continuously inhabited cities in the world and one of the eight World Heritage Sites of Sri Lanka - From the 4th century BC, it was the capital of the Sinhalese until the beginning of the 11th century AD - The ancient city, considered sacred to the Buddhist world, is today surrounded by monasteries covering an area of over sixteen square miles (40 kilometers square) - Return to the hotel & evening free to stroll around the area - Overnight stay at Hotel in Sigiriya

Day 3 Transfer to Kandy & Sightseeing – It is approximately 90 kilometers via A902 and is nearly 2 1/2 hours to 03 hours drive by road - Early morning breakfast at the hotel and proceed to Kandy - This lovely city was the last Capitalof the Kingdom of Sri Lanka before it became a colony of the British Empire - During the last two centuries of the Kingdom, Nanayakhar princes of India exerted substantial influence among the rulers of this country - Encircled by hills, with a tranquil lake in its centre, it is the site of the renowned "Temple of the Tooth" - Places of interest are the Peradeniya Botanical Gardens and the Mahaweli Diversion Project in their impressive settings - Temple of the Sacred Tooth Relic - Ever since 4th Century A.D, when the Buddha's Tooth was brought to Sri Lanka hidden from sacrilegious hands in an Orissan princess' hair, the Relic has grown in repute and holiness in Sri Lanka and throughout the Buddhist world - It is considered SriLanka's most prized possession - Kandy Sightseeing, Temple of the Sacred Tooth Relic - Botanical Garden Peradeniya - Cultural Show  - Return to the hotel & evening free to stroll around the area - Overnight stay at Hotel in Kandy

Day 4 Transfer to Nuwara Eliya & Sightseeing - It is approximately 80 kilometers and is nearly 02 1/2 hours to 03 Hours drive - Breakfast at the hotel. Leave for Nuwara Eliya En -route visiting tea plantation & a factory - Nuwara Eliya - The ‘Little England’ of Sri Lanka, is set against beautiful backdrops of Mountains, Valleys, Waterfalls and Tea Plantations - It is supposed to be one of the coldest places on the island, where the air is pure, cool and distilled up through 1,884 meters; windswept peaks lie shrouded in mist, while gaily clad tea puckers wind their way among tea bushes listening to the wild music of the water falls. The is city complete with a Lake, Golf course and Race course ideal for hikes, golf, horse riding and boating - Nuwara Eliya Sightseeing includes Seetha Amman Temple, Gregory Lake - Overnight stay at Hotel in Nuwara Eliya

Day 6 Bentota Activities i.e. Liesure at Beach - Early morning breakfast - Bentota is a coastal town in Sri Lanka, located in the Galle District of the Southern Province - Bentota is a tourist attraction, with a local airport (Bentota River Airport) and a handful of world-class hotels - It is a destination for watersports - Bentota also delivers an ancient art of healing called Ayurveda - Bentota is famous for its toddy production, an alcoholic beverage made out of coconut nectar - Kosgoda Turtle Hatchery located nearly 11 kilometers south of Bentota - It is a community based turtle hatchery and turtle watching project set up by the Turtle  located on Induruwa beach - Overnight stay at Hotel in Bentota

Day 7 Transfer to Colombo & Sightseeing – Early morning breakfast - Next surface transfer to Colombo - It is approximately 82 kilometers and is nearly 02 Hours drive by road - Colombo-the capital of Sri Lanka -is the largest city and main port of Sri Lanka - Colombo is the financial centre of the island and a popular tourist destination - It is located on the west coast of the island center of Sri Lanka. A bustling metropolis, the city is an attractive blend of old and new. It has the lazy charm of the bygone era combined with the verve and vivaciousness of a modern city - Colombo is an ideal location to start the Sri Lanka sojourn - Colombo Sightseeing - Old Parliament - Galle Face - Dutch Hostital - Town Hall - Gangarama Temple -  BMICH - New Parliament - Evening free to stroll around the area or and visit shopping mall - Back to Hotel / Resort - Overnight stay at Hotel in Colombo