It is place in the South - Western Terai of Nepal, evokes a kind of holy sentiment to the millions of Buddhists all over the world. Lord Buddha was born in 623 B.C. in Lumbini, sacred gardens, pools, buildings and groves. It is situated in the plains of south - western Nepal in the foothills of Churia range. This place is endowed with a rich natural setting of fauna and favorable climate. Historically, the region is an exquisite treasure - trove of ancient antiquities. It has diversified flora. The site, described as a beautiful garden in the Buddha’s time still retains its legendary charm and beauty.  12 miles north of Lumbini lies the dense and picturesque sal - grove. Buddhists- all over the world knew Lumbini is the place where the Lord was born.  The descriptions of famous Chinese pilgrims (of ancient times) Huian Tsang and Faeihan indicated to this area - saying 'Lumbini-where the lord was born is a piece of heaven on earth and one could see the snowy mountains amidst a splendid garden - embedded with stupas and monasteries!

Visit to the weekly Monday bazaar will mesmerise anybody. Spices, pottery, jewelry, saris and various other items are displayed like the Arabian Nights, with colorful merchandise spread out under the trees and the air perfumed with incense. Ox -carts loaded with hay and tea stalls etc are just like mentioned in the medieval period.

On December the 1st 1886 when a German archaeologist Dr. Alois A. Fuhrer came across a stone pillar and ascertained the exact location and then it was declared beyond doubt the birthplace of Lord Buddha.

Railways - Nepal has railway connections with its neighboring country, India. Two stretches of railway are Raxaul (India) to Amlekhganj (Nepal) and the other is Raxaul (India) to Janakpur (Nepal).  Buses are available for Kathmandu from Janakpur and Amlekhganj. All the bordering towns of Indo - Nepal are served by Indian Railway system.

Roadways – It is well connected with roads to different towns of Nepal. Roads are good and have developed in the last few years. 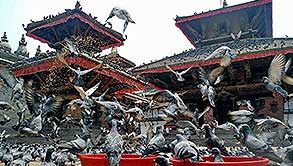 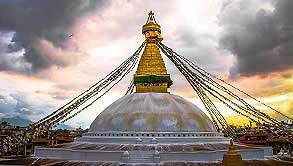 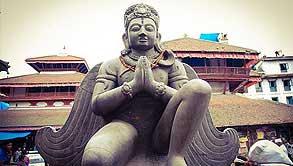