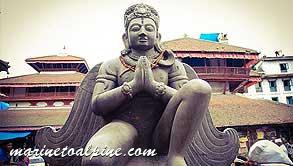 Day 1 Arrival at Gorakhpur and Transfer to Lumbini - Receive guests at Gorakhpur & Transfer Our representative will be there to receive the guest at Gorakhpur & transfer to Nepal border Suanuli nearly 125 kilometres takes 03 hours - Hotel check in Lumbini - freshen up - visit Lumbini garden - LUMBINI - Lumbini is the pilgrim for every Buddhist & others - It is a beautiful garden full of green Sal trees - Many Buddhist visit here yearly and the shrines of different countries are built inside here which gives the image of holy spiritual and religious values inside it - The beautiful and peaceful monasteries inside it give the pleasure of peace and devotion inside us - Lumbini, one of the holy and sacred places where the Lord Buddha was born is listed in the World Heritage Site in 1997 - thus Lumbini holds the historical and religious significance of Nepal - Maya Devi Temple - where Buddha’s Mother giving birth to him - Ashoka Pillar - which was erected by Emperor Ashoka to commemorate his pilgrimage to the sacred site - Puskarani or Holy Pond - where Queen Mayadevi had taken a bath just before giving birth to the Buddha, Stupa & Monastery - Monastic Zone & Others - walk through world peace lamp - monastic zones - you can see traditional monasteries belongs to different countries - Germany, Chinese, Burmese, Mahabodhi Society, Thailand etc - Rre relates with Theravada and Bajrayana architectures - Overnight stay at Lumbini

Day 3 Forest Activities & Transfer to Pokhara - Early morning Breakfast – Elephant back ride safari(optional) - Elephant ride is also the safest way to enter the jungle while one can observe wild animals and birds from up-close – Transfer to Pokhara approximately 160 kilometers takes 05 to 06 hours - Pokhara, the city of lakes and is the second largest city of Nepal after Kathmandu - Three peaks i.e. Dhaulagiri, Annapurna &Manaslu is above 8000 meters & can be seen from the city - The Machhapuchchhre (Fishtail) with an elevation of 6,993 metres (22,943 feet) is the closest to the city - It is also known as a gateway to the Annapurna Circuit- Hotel check in Pokhara - Evening free for own activities - Overnight stay at Pokhara

Day 5 Transfer to Nagarkot - Early Morning Breakfast - After breakfast transfer to Nagarkot nearly 232 kilometers takes 6 – 7 hours by road – on the way to NagarkotManakamana Temple Darshan by Cable Car (Cable Car tickets own) – after darshan proceed to Nagarkot – Nagarkot - 32 kilometers east of Kathmandu, in Bhaktapur District - At an elevation of 2195 meters, it is one of the most scenic spots for its sunrise view of the including Mount Everest as well as other snow-capped peaks of the Himalaya range of eastern Nepal - Nagarkot also offers a panoramic view of the Kathmandu valley - Overnight stay at Nagarkot - hotel check in Nagarkot – Overnight stay at Nagarkot

Day 7 Full Day Sightseeing at Kathmandu - Early morning Breakfast - After breakfast full day sightseeing of Kathmandu -Pashupati Temple - 05 kilometer east of Kathmandu city centre - Pashupati Nath Temple is one of the most important holiest sites for Hindus all over the world - Boudha Nath Stupa - 05 kilometers east of central Kathmandu - The stupa stands on a three – Tiered platform raised over the crossed rectangles in order to bring the Yantra form – Swayambhunath Stupa – 04 kilometer west of Kathmandu city on a little hillock &Patan Durbar Square - 05 kilometers south of central Kathmandu, across the Bagmati river - This city founded in 3rd century A.D by King Veera Dev - The monuments in this square date back to the medieval Malla period from 16th to 18th century – Overnight stay at Kathmandu

Day 8 Departure Transfer to Birgunj - Early morning breakfast – Birgunj is located on the borders with the Indian state of Bihar - Birgunj is a metropolitan city and border town in Parsa District in the Narayani Zone of southern Nepal - It lies 140 kilometers south of the capital Kathmandu and is known as the "Gateway to Nepal" - Some airlines fly to Simara, from where it is approximately 30 kilometers and is around 45 minutes to reach Birgunj - Transfer to Birgunj (Raxoul) approximately 280 kilometres takes 05 to 06 hours by road – Drop to Birgunj (Raxoul) Nepal border