Spacious and surrounded by tree covered mountains, Jakar is considered to be one of the most beautiful tourist destinations in all of Bhutan, and it is commonly referred to as "Little Switzerland". Jakar is the district capital of the Bumthang district in Bhutan. The place has many monasteries and sacred sites located here. You will come across wide range of varied budget accommodations offering great services and hospitality for tourists. Winters are extremely chilly and cold so visit during the months of October or November and March or April can be the ideal time, however even in winters you can enjoy the mesmeric beauty of the place with family and especially for honeymooners.

The major landmarks of tourist interest are firstly the Jakar Dzong - one of the largest and most impressive Dzongs in Bhutan and houses the administrative and monastic offices for the Bumthang district and secondly the Wangdicholing Palace. Built in 1857 is an unassuming structure, lacking the ramparts and protective walls which became standard features of later palaces. You can also find some prominent sacred sites like Kurje Lhakhang which is one of Bhutan's most sacred monasteries, constructed in 1652, Zangto Pelri Lhakhang is the latest addition to the sacred sites in the area houses a two story high mandala representing Guru Rinpoche's Copper Colored Mountain. The temple of Jambey Lhakhang is one of the 108 monasteries that were miraculously constructed by King Songten Gampo in one night, others include Lhodrak Kharchhu Lhakhang, Tamshing Lakhang (Tamzhing Monastery or Gompa) built in 1501 by local Buddhist and Chakhar Lhakhang (Iron Castle).

Taxis are available from the towns of Thimphu, Paro, Punakha, Gelephu and Phuentsholing. Although tourists travelling in Bhutan are suggested to go for package tours in Bhutan. That will be helpful to get the permits. Bhutan's national carrier, Druk Air and Bhutan Airlines both provide international flights to its international airport at Paro. Bathpalathang Airport is situated right in the middle of the Jakar town with flight from Paro to Bumthang which lands at Bathpalathang Airport. Tashi Air and Druk Air both provide domestic flights. Although the service remain cut off many a times throughout the year 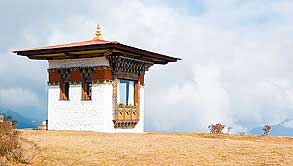