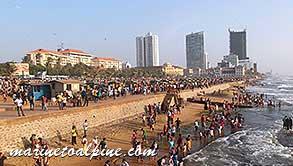 Day 1 Arrival at  Bandaranaike International Airport  (CMB) / Ratmalana Airport (RML) / Mattala Rajapaksa International Airport  (HRI) / Port of Kolomtota and transfer to hotel - Upon arrival transfer to hotel in Colombo -  Relax at the hotel and have some refreshment - Commence a city tour of Colombo in the afternoon Colombo - A drive through the city will take you to the Fort and Pettah - The commercial area of the city and tree-lined Colombo - 07 Cinnamon Gardens - The Hindu Temple at Sea Street, lined with goldsmith's shops, the Dutch Church at Wolvendaal, dating back to 1749 - The Independence Hall, B.M.I.C.H, see the replica of Avukana Buddha, the Independence Square and Gangarama Temple -Evening free to stroll around the area and visit shopping mall - Back to Hotel or resort - Overnight stay in Colombo

Day 2 Excursion to Galle - Early morning breakfast - Proceed on a sightseeing tour of Galle including the Dutch Fort The Fort of Galle - The South Coast’s major city is Galle, whose oldest landmark is the massive Portuguese and Dutch fort in which the central city is contained - But the city may be much older - Some scholars believe it to be the ‘Tarshish’ of the Old testament, to which King Solomon sent his merchant Vessels, and to which Jonah fled from the Lord - Today, the 90 acre Galle Fort who’s no evidence of the Portuguese founders - The Dutch incorporated the
Portuguese northern wall in a great rampart in 1663 - A second, taller wall was build inside of it. Between the two walls, a covered passage connected the central bastion with the fort’s two half bastion’s overlooking the sea - The original gate to the fort was by the harbor - It is still there, marked by the old Dutch V.O.C ( for ‘Verenigde Oost Indische Compagnie) arms with a rooster crest -Drive back to Colombo - Enroute visit Kosgoda turtle hatchery - Overnight stay in Colombo