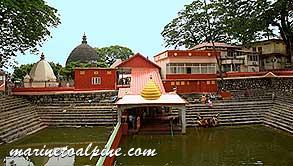 Day 2 Manas National Park Forest Activities - Located in the Himalayan foothills - It is contiguous with the Royal Manas National Park in Bhutan - The park is known for its rare and endangered endemic wildlife such as the Assam roofed turtle, hispid hare, golden langur and pygmy hog - Manas is famous for its population of the wild water buffalo - Early morning Elephant Safari in Mathanguri range - Return for breakfast - Afternoon half round of Jeep safari in Bansbari range - Check into Hotel - Evening free to stroll around the area or visit local marketfor shopping - Overnight stay at Manas National Park

Day 3 Transfer to Shillong - Early morning breakfast - Next one has to start for Shillong - The distance is 240 kilometers and is nearly 06½ hours to 07 hours drive - The drive is long and is scenic - One will have to have a break for refreshment - Just before entering Shillong - visit Barapani or Umium Lake - Umiam Lake is a reservoir located in the hills 15 kilometers from Shillong in the state of Meghalaya, India - It is spread over 220 square kilometers - Next drive to Shillong - Shillong is a hill station in northeast India known for the manicured gardens at Lady Hydari Park - The rolling hills around the town reminded the European settlers of Scotland - Hence known as the "Scotland of the East - Check in Hotel - Evening free to stroll around the area / Police Bazaar - Enroute visit Umium Lake - Check in Hotel - Overnight in Shillong

Day 4 Excursion to Cherrapunjee - Early morning breakfast - Cherrapunji is approximately 60 kilometers and is 02 hours drive one way by road - Cherrapunji has oft been credited as being the wettest place on Earth, but for now nearby Mawsynram currently holds that distinction - Cherrapunji is popularly known as Sohra being more commonly used is a subdivisional town in the East Khasi Hills district in the Indian state of Meghalaya - The swift flowing rivers and streams flow in a southernly direction to the plains - Other attractions are Caves & view of Bangladesh (Neighbouring country) - Visit Dwan Syiem view point, Noh kalikai falls, Mawsmai caves, Seven Sister falls, Eco Falls & Eco Park - Later drive back to Shillong - On the way visit Shillong Peak & Elephant Falls - In the evening, one can go for shopping at Police Bazar - Overnight in Shillong

Day 5 Excursion to Dawki - Mawlynnong - Shillong - It is approximately 85 kilometers and is nearly 2 ½ hours drive one way - After breakfast excursion to Dawki river The Indo Bangladesh Border and then to Mawlynnong (The cleanest village in Asia) - Mawlynnong nestled in the pristine hill state of Meghalaya, is along the Indo-Bangla border - This nice and colourful little village is known for its cleanliness - The village offers many interesting sights such as the living root bridge and another strange natural phenomenon of a boulder balancing on another rock - Residential facilities are still scarce and are in the process of being developed, the existing one constructed from bamboo and thatch is quite hospitable - It is an artist's delight and would titillate creative writers and poets - Drive back to Shillong - Evening visit Local markets - Over night in Shillong

Day 6 Transfer to Kaziranga - Early morning breakfast - Next one has to drive nearly 7 - 7 ½ hour over approximately a distance of 330 kilometers - Along N H 40, S H 18, A H 1 / N H 37 - After breakfast drive to Kaziranga - Kaziranga National Park is a national park in the Golaghat and Nagaon districts of the state of Assam, India - A World Heritage Site, the park hosts two-thirds of the world's great one-horned rhinoceroses - Four main types of vegetation exist in this park - These are alluvial inundated grasslands, alluvial savanna woodlands, tropical moist mixed deciduous forests, and tropical semi-evergreen forests - Kaziranga is recognized as an Important Bird Area by BirdLife International for conservation of avifaunal species - Check in at hotel / resort - Evening free to stroll around the area - Overnight stay at Kaziranga

Day 7 Kaziranga Forest Activities & Transfer to Guwahati - Early morning one can enjoy Elephant ride in the park - Elephant riding time are: 1st Ride- 5.15-6.15 AM; 2nd ride: 6.30-7.30 AM - Return to hotel / Resort for Breakfast - After breakfast guests will start for Guwahati - Next one has to drive nearly 05 - 50 ½ hour over approximately a distance of 255 kilometers -Guwahati is a fast growing premier city - Guwahati is on the southern bank of the mighty Brahmaputra river in Kamrup district of Assam - Guwahati is the largest city of Assam, a major riverine port city and one of the fastest growing cities in India - Guwahati is the second-largest metropolitan region in eastern India, after Kolkata - Check in at Hotel - In the evening set out on a River cruise to watch the sun go down the Brahmaputra River and feel why the river is locally called ‘Luit’- color of blood (Optional) - Evening free to stroll around the area or visit local market - Overnight stay at Guwahati