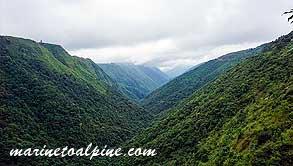 Day 1 Arrival at Guwahati Lokpriya Gopinath Bordoloi International Airport (GAU) / Guwahati Railway Station (GHY) & transfer to Shillong - Our Official will receive guests on arrival - Assistance on arrival at Guwahati Airport / Railway Station and transfer to Shillong - Next board vehicle and enjoy the view on road - Its approximately 120 kilometers & is nearly 03 hours drive by car - It is the capital and hill station of Meghalaya, also known as "The Abode of Clouds", one of the smallest states in India - The town reminded the European settlers of Scotland - Hence, they would also refer to it as 'Scotland of the East' - On the way if time permits visit Umium Lake - On arrival check-in to your hotel - Rest of the day at leisure or one can stroll around the local market or police Bazaar - Overnight stay in Shillong

Day 2 Excursion to Cherrapunjee - Early Morning breakfast - Next drive to Cherrapujee - It is approximately 60 Kilometers i.e. 02½ - 03½ hours drive by car - Currently the historical name Sohra is more commonly used is a subdivisional town in the East Khasi Hills in Meghalaya - It is credited as being the wettest place on Earth, although nearby Mawsynram currently holds that record - Enjoy a pleasant drive to see the roaring waterfalls leaping into deep gorges, including the famed Nohsngithiang falls - The lovely town is also famous for its limestone caves and orange honey. Watch the Dein - Thlen Falls, Noh-Khalikai Falls, Noh-Sngithiang Falls and also drive to the Mawsmai Cave, Thangkharang Park and the Living root Bridge - Later after lunch back to Shillong drive back to Shillong - On the way visit to Shillong Peak & Elephant Falls - Return to The Hotel / Resort - Evening if time permits visit local market (Police Bazar) - Night stay at Shillong

Day 3 Transfer from Shillong (Meghalaya) to Tezpur (Assam) - Early Morning breakfast - Next drive approximately 260 kilometers ie. a drive of nearly 07 hours - Tezpur is a city and the administrative headquarters and municipal board of Sonitpur district in the state of Assam in northeastern India - It is an ancient city on the banks of the river Brahmaputra and is the largest of the north bank town and is approximately 175 kilometres northeast of Guwahati, considered to be the Cultural Capital of Assam - Reach Tezpur - Check into hotel - If time permits one can visit the ruins and remains of Agnigarh where the immortal romance blossomed and stands testimony to the eternal time - Later visit cole park where you can enjoy boating - Evening free to stroll around the local Market - Overnight stay at Tezpur

Day 4 Transfer from Tezpur (Assam) to Ziro (Arunachal Pradesh) - Early Morning breakfast - Next drive approximately 300 kilometers i.e. a drive of nearly 08 hours - Ziro is a small town of Arunachal Pradesh at an elevation of nearly 5754 feet and is one of the most famous hill station in the state - It comprises the original Ziro village and the new Zero town (Hapoli) - The distance between these two places is 05 kilometers - There is the well known Talle Sanctuary - It is well known for Apatani Tribe, which is found in this region - Also known as the land of Apatanis - Also famous for the conservation and Paddy - cum - Fish culture which is unique amongst the Arunachal tribals - On the way explore Nishi Tribal Villages - Check in Hotel - Evening free to stroll around the market area - Overnight stay at Ziro

Day 5 Ziro Village Tour - After breakfast visit Hong village – one of the largest tribal village in Asia - Later visit other ethnic villages - Explore the tribal villages inhabited by Apatani tribal people – Apatani, like other tribes of the state also believe in sun and the moon as a god and have traditional altar in there home made up of Bamboo and Cane the main inhabitant of Ziro area - Uniqueness of Apatani tribe is tatooing on women face and its nose plug - Five small rivulets namely Subansiri, Nishi, Apatani, Dafala and Miri flow nearby and few peaks also; one is the Salin peak on the old Apatani trade route to North Lakhimpur - Kile Pakho, one of the high mountain ridge is just 7 kilometers from Ziro and is rich in biological diversity with flora and fauna - There is a Handicraft Centre - Evening free to stroll around the market area - Evening free to stroll around the local Market - Overnight at Ziro

Day 6 Transfer from Ziro to Majuli - Early Morning breakfast - After breakfast drive to majuli-the land of satras approximately 250 kilometers i.e. a drive of nearly 05 to 06 hours - Majuli or Majoli is a large river island in the Brahmaputra River, Assam, India - It is the largest River Island of the world - The island Majuli has shrunk as the river surrounding it has grown - The island is formed by the Brahmaputra river in the south and the Kherkutia Xuti, an anabranch of the Brahmaputra, joined by the Subansiri River in the north - The island is also accessible by ferries from the city of Jorhat - The island is about 200 kilometers east from Guwahati - It was formed due to course changes by the river Brahmaputra and its tributaries, mainly the Lohit - Majuli is the abode of the Assamese neo-Vaisnavite culture - Evening free to stroll around the local Market - Over night stay at Majuli

Day 7 Majuli Sightseeing - Early morning breakfast - After breakfast visit to satras and admire the close proximity of nature that thrills - The festival of Ali aye ligang is celebrated during mid-February for 05 days - Guest can go on village walk and also visit the Satras or monasteries - Only twenty-two of the original sixty-five are operational - The satras have honed certain art and craft traditions like in Natun Samuguri Satra one can still find the craft of mask-making; and in the Kamalabari Satra the finest boats are made - Students learn theatre, dance, music & mask-making & these arts survive today along with other monastic rituals, prayers, discipline & celibacy - Guest can watch a music & dance show at the Uttar Kamalabari monastery - Weaving is particularly delicate, making use of a whole range of colours in cotton and silk which found only in Assam - Evening free to stroll around the area - Overnight stay at the hotel – Visit various satras - Overnight stay at Majuli