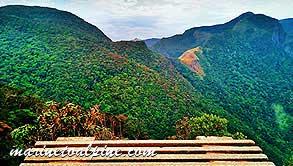 Day 1 Arrival at  Bandaranaike International Airport  (CMB) / Ratmalana Airport (RML) / Mattala Rajapaksa International Airport  (HRI) / Port of Kolomtota  & driven to Kandy - It is approximately 135 kilometers and requires 03 1/2 to 04 hours by road - Kandy is a major city in Sri Lanka, located in the Central Province, Sri Lanka - It is the second largest city in the country after Colombo - It was the last capital of the ancient kings' era of Sri Lanka - The city lies in the midst of hills in the Kandy plateau, which crosses an area of tropical plantations, mainly tea - Kandy is both an administrative and religious city and is also the capital of the Central Province - Kandy is the home of The Temple of the Tooth Relic (Sri Dalada Maligawa), one of the most sacred places of worship in the Buddhist world - It was declared a world heritage site by UNESCO in 1988 -  On route visit Pinnawala Elephant Orphanage - Which is home for about 90 elephants, out of which some are baby elephants found abandoned or orphaned in the wild - The best time to visit is during the feeding time at 9.15 AM or 1.15 PM - Overnight stay in Kandy

Day 2 Kandy Sightseeing -  After breakfast proceed to visit Royal botanical gardens in Peradneiya and kandy city tour - In the afternoon visit Temple of The Tooth Relic and proceed on a sightseeing tour of Kandy including visit a gem factory where you will see gems of all types that are found in Sri Lanka  - Finally you will see artisans in a workroom where you will see several people who are cutting and polishing the gems - You will also visit the Kandy Garrison cemetery - this beautifully kept garden cemetery was founded in 1817 for the internment of British-era colonists and is managed by the Commonwealth War Graves Commission. Thereafter witness a cultural show - Temple of the Sacred Tooth Relic - ever since 4th Century A.D, when the Lord Buddha’s sacred Tooth was brought to Sri Lanka hidden from sacrilegious hands in an Orissan princess’ hair, the Relic has grown in repute and holiness in Sri Lanka and throughout the Buddhist world - It is considered Sri Lanka’s most prized possession - Overnight stay in Kandy

Day 3 Transfer to Nuwara Eliya & Sightseeing - It is approximately 80 kilometers and is nearly 02 1/2 hours to 03 Hours drive - Breakfast at the hotel - Leave for Nuwara Eliya En -route visiting tea plantation & a factory - Nuwara Eliya - The ‘Little England’ of Sri Lanka, is set against beautiful backdrops of Mountains, Valleys, Waterfalls and Tea Plantations - It is supposed to be one of the coldest places on the island, where the air is pure, cool and distilled up through 1,884 meters; windswept peaks lie shrouded in mist, while gaily clad tea puckers wind their way among tea bushes listening to the wild music of the water falls - All around Nuwara Eliya you will see evidence of the British influence - Houses are like country cottages or Queen Ann style mansions -  It also has one of the finest 18 hole golf courses in South Asia - Nuwara Eliya Sightseeing includes Seetha Amman Temple, Gregory Lake - Overnight stay at Hotel in Nuwara Eliya

Day 5 Leisure day at Bentota - Day at Leisure best to spend in Beach - Breakfast at the hotel - Buddhism festival which happens once a year at the end of December - It is similar but smaller than the Esala Perahera in Kandy - Elphants, dancers, fire jugglers and musicians parade from 11:00 PM to 01:00 AM & the Turtle hatcheries, (Induruwa beach) - Place where turtle eggs and babies are protected until their release are best tourist attractions in the region - Next visit beach for  Leisure - Evening free to stroll around the area and visit shopping center -  Evening is quite busy with a variety of streetfood and local diners to choose from - Return to the hotel - Overnight stay at Bentota

Day 6 Transfer to Colombo & Sightseeing - After the breakfast proceed to colombo - It is approximately 82 kilometers and is nearly 02 hours drive by road - Colombo is the largest city and the commercial, industrial and cultural capital of Sri Lanka - It is located on the west coast of the island and adjacent to Sri Jayawardenepura Kotte suburb or the parliament capital of Sri Lanka  - In the afternoon commence a city tour of Colombo - Colombo - A drive through the city will take you to the Fort and Pettah - The commercial area of the city and tree-lined Colombo - 07 Cinnamon Gardens - The Hindu Temple at Sea Street, lined with goldsmith's shops, the Dutch Church at Wolfendhal, dating back to 1749 - The Independence Hall, B.M.I.C.H, see the replica of Avukana Buddha, the Independence Square and Gangarama Temple - Evening free to stroll around the area and visit shopping center - Return to the hotel - Overnight stay at Colombo