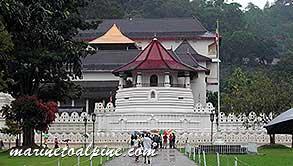 Day 1 Arrival at  Bandaranaike International Airport  (CMB) / Ratmalana Airport (RML) / Mattala Rajapaksa International Airport  (HRI) / Port of Kolomtota  & driven to Kandy - It is approximately 135 kilometers and requires 03 1/2 to 04 hours by road - Kandy is a major city in Sri Lanka, located in the Central Province, Sri Lanka - It is the second largest city in the country after Colombo - It was the last capital of the ancient kings' era of Sri Lanka - The city lies in the midst of hills in the Kandy plateau, which crosses an area of tropical plantations, mainly tea - Kandy is both an administrative and religious city and is also the capital of the Central Province - Kandy is the home of The Temple of the Tooth Relic (Sri Dalada Maligawa), one of the most sacred places of worship in the Buddhist world - It was declared a world heritage site by UNESCO in 1988 - En route visit Pinnawala Elephant Orphanage next Visit herbal and spice garden, Evening witness a cultural dance performance - Overnight stay in Kandy

Day 2 Sightseeing at Kandy and Transfer to Colombo - Have a breakfast at the hotel - Visit Royal Botanical Garden, Peradeniya - Commence a city Tour of the Tooth Relic - Thereafter one would be driven to Colombo - It is approximately 135 kilometers and requires 03 1/2 to 04 hours by road - Colombo is the largest city and the commercial, industrial and cultural capital of Sri Lanka - It is located on the west coast of the island and adjacent to Sri Jayewardenepura Kotte suburb or the parliament capital of Sri Lanka - Colombo is also the administrative capital of Western Province, Sri Lanka and the district capital of Colombo District - Colombo is often referred to as the capital since Sri Jayewardenepura Kotte is a satellite city of Colombo - Colombo is a busy and vibrant place with a mixture of modern life and colonial buildings - Evening free to stroll around the area - Overnight stay in Colombo

Day 3 Sightseeing at Colombo & Transfer to Bentota - Have a Breakfast at the hotel - It is approximately 82 kilometers and is nearly 02 Hours drive by road  - Bentota is a tourist attraction, with a local airport (Bentota River Airport) and a handful of world-class hotels - Bentota also delivers an ancient art of healing called Ayurveda and is famous for its toddy production, an alcoholic beverage made out of coconut nectar - Bentota is the water-sports capital of Sri Lanka - Available options are the following activities like Windsurfing, Surfing, Water Skiing, Wakeboarding, Body boarding, Banana ride, Tube ride, Jet-ski, Deep Sea Fishing, River Fishing, Snorkeling, Diving, River cruises - Well-trained and experienced instructors and certificate holders are pleased to welcome guests in water sport center and to assist them in the discovery of the richness of the tropical waters of the Indian Ocean - Relax by the beach - Commence a city tour of Colombo - Transfer to Bentota - Relax by the beach - Overnight stay in Bentota