Pasighat is a charming little town in Arunachal Pradesh located on the shoreline of Brahmaputra River situated at the eastern foothills of the Himalayas is a combination of lush forests, majestic mountains, sparkling waterfalls and splendidly gorgeous hanging bridges. It is often referred to as the ‘Gateway to Arunachal Pradesh’ and hosts uncountable nature lovers and adventure enthusiasts every year from across the nation. If you really want to spend a holiday amidst nature, Pasighat is the place to visit with tranquil set up and virgin scenery.

Major tourist destinations of Pasighat consists of the Daying Ering Wildlife Sanctuary, which is one of the most popular wildlife parks of the state for tourists and is a great place for wildlife lovers to explore with endless variety of animals and birds. This Wildlife reserve is known for thrilling wildlife safari expeditions or a captivating bird watching tour. Pangin about 60 km from Pasighat, is a place where River Siyom meets River Siang and the blue waters of Siyom meet the green Siang. Kekar Monying is a mountain cliff also an important historical place. It talks about intriguing tales of a ranging war once held between the native tribes and the British Army. Pasighat Buddhist Temple, East Siang District Museum are also quite popular tourist destination in and around Pashighat in Arunachal Pradesh.

You can find a number of well-maintained hotels in Pasighat from moderate to expensive and it offers a charming ambience of the surroundings. There are also nominal charged resorts and lodging options in the region. For having a sightseeing expedition of the entire place winter season is considered the best time to visit (October to March)

State Transport buses run from Pasighat to Itanagar, the capital of the state. From Pasighat to Shillong, Meghalaya via Guwahati on the daily basis services are also available ensuring connectivity by road across places in North East. Private taxis also operate services along different districts with Pasighat. Pasighat Airport is well connected with Guwahati which in turn has established air connectivity with rest of the country. While the closest railway station to Pasighat is Murkongselek at a distance of 35 kilometres 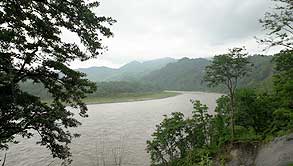